How to normalize the RMSE

This post has been stimulated by a discussion with a colleague who asked about the normalization method for the root mean square error (NRMSE) in the INDperform R package, which is based on the indicator testing framework outlined in my article (Otto et al. 2018) 1 . At the time of writing the article and package I simply used a common approach and didn’t test it much further. But sparked by this discussion I started to test it thoroughly (as you will see below), which will make me revise the package.

In statistical modeling and particularly regression analyses, a common way of measuring the quality of the fit of the model is the RMSE (also called Root Mean Square Deviation), given by $$RMSE = \sqrt\frac<\sum_

where \(y_\) is the ith observation of y and ŷ the predicted y value given the model. If the predicted responses are very close to the true responses the RMSE will be small. If the predicted and true responses differ substantially — at least for some observations — the RMSE will be large. A value of zero would indicate a perfect fit to the data. Since the RMSE is measured on the same scale, with the same units as \(y\) , one can expect 68% of the y values to be within 1 RMSE — given the data is normally distributed.

So calculating the MSE helps comparing different models that are based on the same y observations. But what if

The first two points are typical issues when comparing ecological indicator performances and the latter, so-called validation set approach 2 , is pretty common in statistical and machine learning. One solution to overcome these barriers — as done in INDperform — is to calculate the Normalized RMSE. 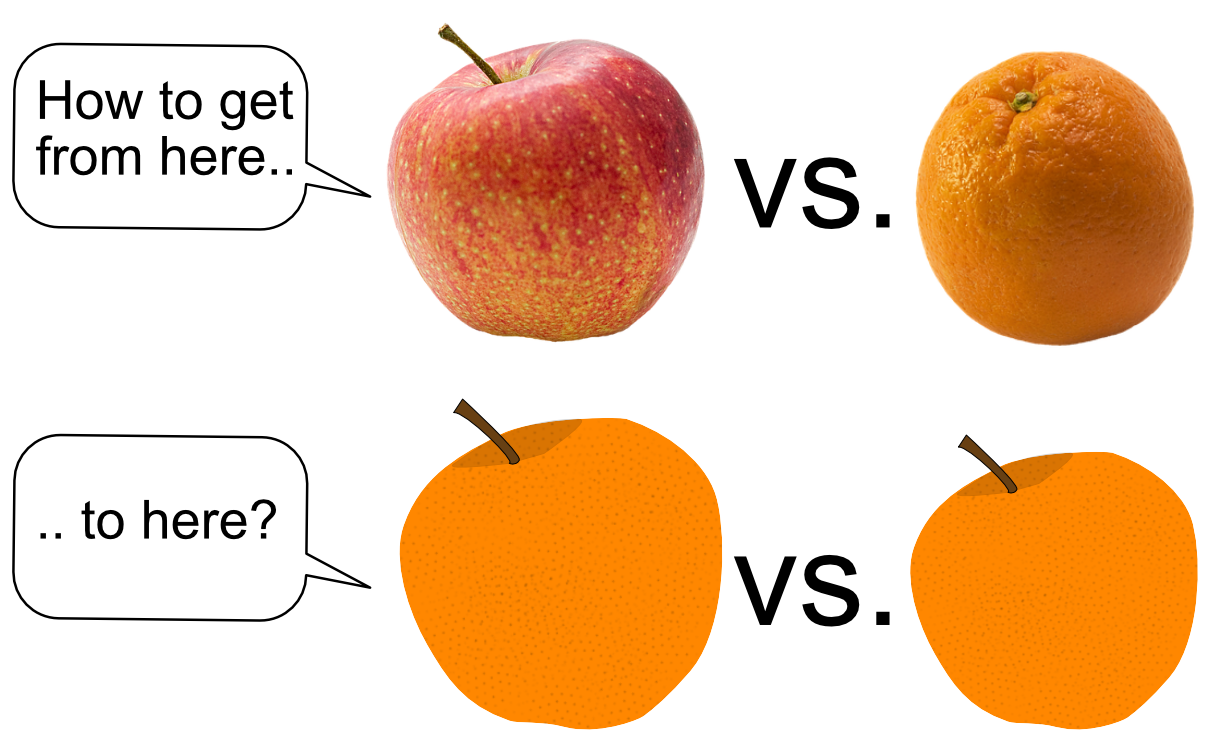 There is a saying that apples shouldn’t be compared with oranges or in other words, don’t compare two items or group of items that are practically incomparable. But the lack of comparability can be overcome if the two items or groups are somehow standardized or brought on the same scale. For instance, when comparing the variances of two groups that are overall very different, such as the variance in size of bluefin tuna and blue whales, the coefficient of variation (CV) is the method of choice: the CV simply represents the variance of each group standardized by its group mean:

While in absolute values the individual whales differ from each other much more than the tuna fish, this variation is rather small relative to the overall size of the whales and then comparable to tuna.

In the same way, normalizing the RMSE facilitates the comparison between datasets or models with different scales. You will find, however, various different methods of RMSE normalizations in the literature:

You can normalize by

the difference between maximum and minimum: \(NRMSE = \frac

If the response variables has few extreme values, choosing the interquartile range is a good option as it is less sensitive to outliers. But how do these methods compare in terms of data transformation and the validation set approach?

In the following comparison I will compare the 4 methods using the original, standardized, sqrt- and log-transformed dataset. First I will use the full dataset to train and test the model (via RNMSE), then split the data into a training and test subset. In this case, I will assume the data is a time series and the validation is performed on the last years (so no random splitting) as done in many time series predictions.

To be able to link the results of the comparison to the approach in INDperform I will also use here Generalized Additive Models (GAM) 3 based on the mgcv package.

The following comp_func() function does the actual modeling, prediction and NRMSE calculation for the different Y’s on the full or split data ( split = TRUE , taking the last 5 observations for testing):

So what did we learn from this simulation?

First and foremost, comparing model performances between different response variables is not that trivial and there is no normalization method (of the one tested here) that is obviously superior. But there are a few implications that data analysts should bear in mind when computing the NRMSE for performance comparison:

But who actually cares about comparing model performances of different response variables? One good example (where the package was made for) is the development of ecological indicators. One major criterion is the robustness or predictability given certain environmental changes. This could be quantified from a statistical model, in which the indicator is modelled as a function of specific environmental variable or pressure, by using the RMSE on the test data. To compare the robustness of different indicators, that are often on different scales and differently treated prior to the modeling, normalizing the NRMSE would be needed.

If the NRMSE is further categorized into let’s say low, medium or high performance, using the standard deviation to normalize could be a good option for the following reason: The sd-based NRMSE represent the ratio between the variation not explained by the regression vs the overall variation in Y. If the regression explains all of the variation in Y, nothing gets unexplained and the RMSE, and consequently NRMSE is zero. If the regression explains some part and leaves some other unexplained, which is at a similar scale than the overall variation, the ratio will be around 1. Anything beyond will indicate a much greater variation or noise than in the variable itself and consequently a low predictability.

Stay tuned for the next update of INDperform, where I will revise the NRMSE calculation (most likely using the sd method) and the cut-offs for scoring!