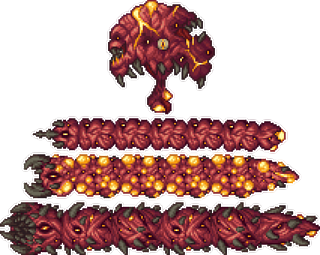 The Perforators are a group of Pre-Hardmode bosses consisting of the Perforator Hive and three worms. The hive is summoned by killing a Perforator Cyst or using a Bloody Worm Food in The Crimson.

This guide will mention items exclusive to Revengeance Mode with no special formatting and will follow the intended progression.

Flattening the ground in the Crimson and placing a platform about 25 blocks high will work for dodging the Hive’s dashes and projectiles, as well as the worms.

While The Perforators will enrage on the surface and have faster attacks, this can be easily worked around due to the surface’s more open space, allowing for more freedom and easy dodging.

Once the Hive is summoned, it will start by hovering over you, shooting a rain of Blood Geysers or Ichor Shots into the air that inflict the Burning Blood and Ichor debuffs respectively. The projectiles are shot upward, then spread as they fall, covering a large area. There are several projectiles fired at once, all of which fall in a single horizontal line. You can run from the rain, by moving the opposite dierction the projectiles were shot in. Alternatively, you can look for the gaps in between the projectiles, and carefully maneuver through them.

While below 70% health and no worms are alive, the hive will position itself above the player every 10 seconds and fire a spread of Ichor Blobs down on them, which create a lingering hazard that lasts several seconds. The player should move to avoid these shots, and attempt to stay as far away from the blobs as possible so that they have sufficient room to move around. If possible, the player should attempt to have this attack occur on the far ends of the arena, or on the ground beneath the upper platform so as to keep them out of the way.

The three worms spawn at three separate health increments; the small worm spawns when the hive drops to 75% health; the medium worm spawns at 50% health; and the large worm at 25%. The worms behave like any other worm, burrowing through blocks to attack you. However, each worm has different attributes:

The larger worms are stronger, but move slower. The worms also get more aggressive as their health depletes. It is recommended to have your minimap open to track the worms’ positions and to target each worm as it spawns. When the worms spawn, hold your position and keep dodging the hive’s projectile rain. Jump or fall and dash in the opposite direction to dodge the worms’ charges, but make sure to compensate for the hive’s projectiles. Continue doing this while attacking the worm until it dies. Keep in mind that while the large worm is alive, the hive will take no damage.

In Expert Mode, the worms move and turn faster, so you must be more careful while dodging the worms. Furthermore, the hive will become invulnerable while the largest worm is alive, forcing you to defeat it in order to finish the fight.

In Revengeance Mode, the hive will retain its previous abilities and will gain the ability to charge at you with speed while a worm isn’t alive. To dodge this attack, let the hive level itself with you, then jump or fall as it gets close. Accessories that boost jump speed and/or height help with dodging the charging. Once a worm spawns, it will stop charging but will gain increased acceleration.

In Death Mode, the hive shoots more often, is more aggressive and will hover closer to you if more than one worm is alive. It is more important in this mode that you target the worms to avoid interception by the hive. The worms also have more segments that are larger.

At this point you should’ve killed The Perforators/Hive Mind and mined plenty of Aerialite to craft new gear to help prepare you for Skeletron.

At this point you should make a trip to the Abyss with a Shadow Key and haul everything you can get out of there, said gear may be handy for defeating The Slime God and obtaining more useful gear. At this point Potions can be made with Blood Orbs at an Alchemy Table, so there are more potions to be used at your disposal, such as Lifeforce Potions or Fabsol’s Vodka.

Upon entering Hardmode, you now have access to a wide variety of equipment for each class. You can now start harvesting Life Fruits for the upcoming battles to increase your survivability.

After killing the Mechanical Bosses you should now have access to Hallowed Bars and Cryonic Bars, allowing you to get more powerful equipment. At this point you should specialize a single class, as the armor set bonuses become much stronger.

The defeat of Plantera makes Perennial Ore available and Ectoplasm easily accessible from the Dungeon. Hardmode Abyss weapons and weapons from the Great Sand Shark should also now be available.

The Calamity Mod adds a plethora of new weapons and equipment for all classes, including its new rogue class, to use throughout the game. Calamity also adds many difficult boss encounters and other situations in which class builds should be optimized in order to efficiently succeed. This is a guide that will show potential weapon and equipment builds for each of the five classes at various points in the game’s progression.

Melee — The melee class sports the highest defense on average and decent crowd control, but many melee weapons have short attack range, and those that do attack from a distance tend to have below-average DPS.

Ranger — The ranged class is a powerful bossing class with very high single-target damage output, and can attack from a long range. Ranged users must gather materials to craft ammunition, but this is not a significant drawback.

Mage — The magic class is fragile but highly varied in attack style, often utilizing special mechanics such as homing and area-of-effect damage. It is held back by reliance on mana, which regenerates very slowly unless the Mana Regeneration buff is in effect. Mages must craft or purchase mana potions if they wish to use high-mana cost weapons for extended periods of time.

Summoner — The summoning class is good at dealing with multiple threats, but most summoner armors have low defense, and minions are often inaccurate against enemies that move very quickly. Summon weapons can be used in conjunction with other classes, however the player must take note of summoning weapons’ frequent conflicts with Immunity frames and Calamity’s minion damage nerf when holding other weapons.

Rogue — The rogue class is a brand new class created by the Calamity mod that generally consists of thrown weapons. It utilizes a unique stealth mechanic that adds new attacks to many rogue weapons, decreases enemy Aggro and increases overall damage done by rogue weapons.

All — This «class» describes gear and items that are usable for all classes. Any equipment such as accessories and armor that are not specific to a class will be listed here.

Each class gains more complex abilities as the game progresses, enabling more strategic variety in combat. It is advised for players to try out every weapon they find to help determine what works best for them. It is also recommended to use buff potions and healing potions to increase efficiency and survivability in combat (especially during events and boss fights).

In general, it is recommended to focus on one class. Many armors, accessories and buffs only benefit a specific class, especially later into the game. However, while their damage output may not be as high, backup weapons from another class can be helpful should the situation require a different weapon.

Some items, armors, and accessories have extra abilities that are activated only by using them together. For example, most wings with a corresponding armor set provide additional stat boosts when used with said armor set, in addition to the flight they give.

This guide will not mention Lore items. It will also not mention Classless weapons that use ammo, such as the Magnum and Bazooka, which deal massive damage but should only be used sparingly due to their limited ammo supply. If a section for a class is blank, please refer to the «All Classes» section of each table.

This guide is not meant to be used as a way to see the best weapons available at a specific point. Instead, it shows some potential weapons that players may find useful and that can be obtained at that point in progression. This is because there are many different ways to approach fights and what works well for one person may not work at all for another. Furthermore, there are frequent balance changes to the mod so an item’s relative power level can fluctuate wildly between updates and because of this, the guide is often not completely up-to-date. Players are highly encouraged to treat the guide as a starting point and to experiment with different weapons, accessories and armor sets to see what works best for them.

For a list of weapons for each specific class sorted by progression (albeit extremely roughly), see the respective class’s weapons page and click the small arrow on the sell price column to sort the table by sell price. An example page for melee weapons can be found here.

Similar pages are also available for sub-classes of weapons. An example page for yoyos can be found here.

† — Use only if you are familiar with the boss(es)

Items restricted to Expert or Revengeance Mode will be italicized.

This table will show a variety of suggested gear for Pre-Hardmode.

This table will show a variety of suggested gear for Hardmode progression.

This table will show a variety of suggested gear for Post-Moon Lord progression.